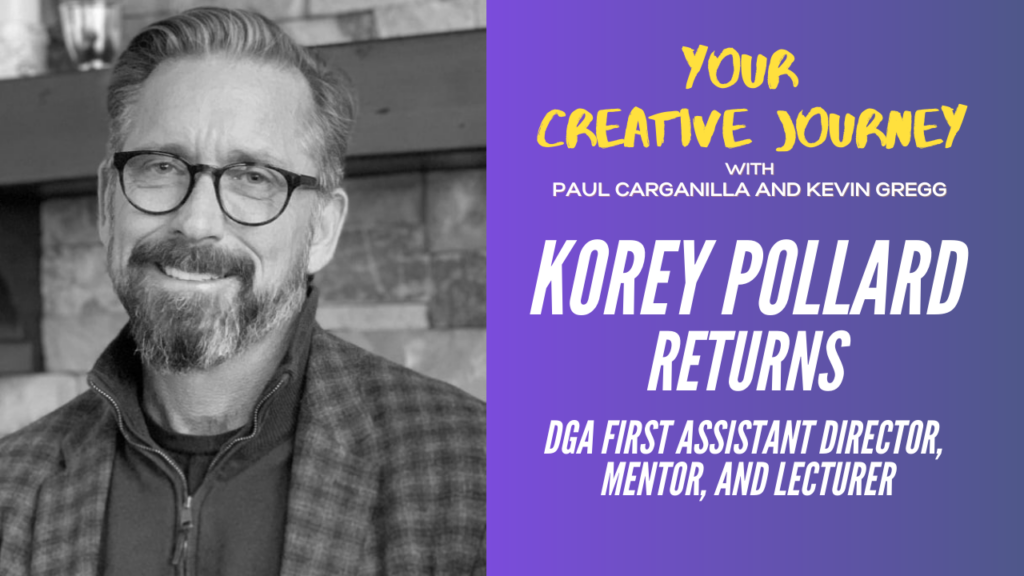 Korey Pollard returns for another round at Your Creative Journey as Kevin and Paul unpack more of his incredible story. Also news about an exciting podcast Korey’s involved with! Don’t miss the fun!
Korey Pollard is a DGA first assistant director, mentor, and lecturer.
His previous television and film credits include Salem (WGN), The Player (Sony/NBC), The King of 7B (ABC Family), Kevin From Work (ABC Family), A to Z (NBC), Stephen Bochco’s Murder In the First (TNT), Nashville, (ABC), Rizzoli & Isles (TNT), The Wedding Band (TBS), Lie to Me (FOX), Life (NBC), the critically-acclaimed show Monk (USA), Deadwood (HBO), House (FOX), Grey’s Anatomy (ABC), Boomtown(NBC), and CSI (CBS).
Film credits include: Once Upon a Time in Mexico, Spy Kids 2, And Starring Pancho Villa As Himself, Thirteen Days, Waterworld, Clear & Present Danger, Eye For An Eye, G.I. Jane, That Thing You Do, and Stand By Me, among many others.
He has been on the advisory boards of Compass College of Cinematic Arts and Hollywood Connect.
He also holds a position on The First Assistant Director/Unit Production Manager Committee of The Directors Guild of America.

Mentioned on this show
https://www.unincarcerated.com/